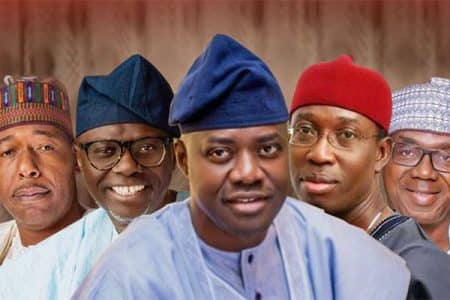 Nigeria is an African country consisting of 36 states, along with a federal capital. Each state is ruled by a governor, who is democratically elected. Naturally, some governors have more resources, connections, and impressive skill sets, making them more powerful than others. Here is a list of the ten most influential Nigerian governors.

Nyesom Wike
Nyesom Wike is the governor of Rivers State, and the location alone is enough of a reason for him to be influential. Rivers State is one of Nigeria’s leading oil-producing states, it’s evident that Nyesom Wike would have more sway over the country.

Nasir El Rufai
As the governor of Kaduna State, Nasir El Rufai is a no-nonsense man and a strict leader. He is highly regarded by Northern Nigerians, which puts him on a pedestal of power over many other governors.

Babagana Zulum
Babagana Zulum is the governor of Borno State, he has gained quite the support over his tenure mainly because of his inspiring personality and effective leadership. He openly challenged problematic leaders, courageously and publicly opposed their views and policies.

Godwin Obaseki
Godwin Obaseki is the governor of Edo State. His position as a governor and his boundless courage for standing up against national party members have earned him a reputation for being a man who cannot be opposed easily.

Abdullahi Ganduje
As the head of one of the most populated states in the country, Kano State, it is not surprising that its governor is a powerful man. His position as a leader in the North has resulted in him being one of the most influential men in office.

Akeredolu Rotimi
As the Ondo State governor, Akeredolu Rotimi also takes his rightful place on this list. He has opposed poor party decisions time and again, openly and without any display of weakness. As a governor of an oil-producing state, he gets more of a say in most important matters.

Ifeanyi Okowa
The governor of Delta State, Ifeanyi Okowa, has previously earned the title of the best governor in the country, and he is not to be taken lightly. With such a good reputation with the public, he has become one of the most influential governors of his time.

Aminu Tambuwal
Aminu Tambuwal is the epitome of hard work and dedication. Starting his education from Town Primary School, he continued to work tirelessly until he became the governor of Sokoto State. Today, he is one of the youngest and most influential governors in the country.

Ifeanyi Ugwuanyi
The governor of Enugu State was born and raised in Enugu City, and it’s fitting that he grew up to be its leader. His policies keep the people of Enugu at his forefront, so he has gained significant support and power in the country.

Seyi Makinde
Besides being the governor of Oyo State, Seyi Makinde has many other occupations, including engineer, entrepreneur, and an expert in gas metering. His knowledge and diversity in these fields have led to his current position as one of the most influential governors.