Cities ranked by population in Nigeria 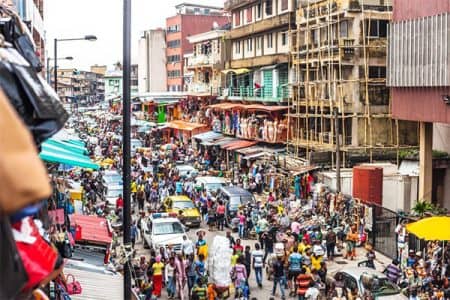 Nigeria is one of the most well-known countries in Africa. Often, due to its rapidly growing economy and increasing population, the country is also called the “Giant of Africa”. Contrary to popular belief, Nigerians are not the same throughout the country – there are thirty-six states and hundreds of ethnic groups. It is also home to one of the most populated cities in Africa and around the world. Here is a list of the most densely populated cities in Nigeria!

Lagos is one of the most popular cities of Nigeria, and consequently, one of the most populated. It houses a population of more than 21 million people. Many are attracted to Lagos because of the investment and business opportunities, making it a hub of diversity – people from all over the world come to Lagos to get their share in its rich corporate world.

Unlike the modernity of Lagos, Kano is an ancient city, and its population – although ranking the city second in number – takes a sharp nosedive. The city is home to a little above 3.5 million residents. Despite being rich in history, the state is known as the industrial hub of Northern Nigeria, with corporations in textiles, food processing, and several other sectors.

Ibadan city is the OYO state capital, with over 3 million people inhabiting it. The city was founded by the Yoruba community centuries back – even today, the group still has quite the hold over the city. Ibadan is mainly known for being a major center for education, housing Nigeria’s first-ever university.

As the capital city of the entire country, Abuja is home to almost 3 million people. Because it is the capital city, it receives more than its fair share of government expenditure – it is one of the fastest-growing cities in Africa and the entire world!

Benin city is known to be one of the oldest cities in Nigeria, with a population of over 1.3 million residents. Therefore, it comes as no surprise that the city is rich in culture, history, and traditions, all of which contribute to the tourism in the city. The locals would trade with Europeans in the olden days, which is undoubtedly the reason why the city continues to grow and flourish today.

Maiduguri takes seventh place, with around 1.2 million residents inhabiting the area. To the locals, Maiduguri is also known as “blessed land”. Out of all the cities in Nigeria, Maiduguri likely has the highest number of Muslims and Christians in its population.