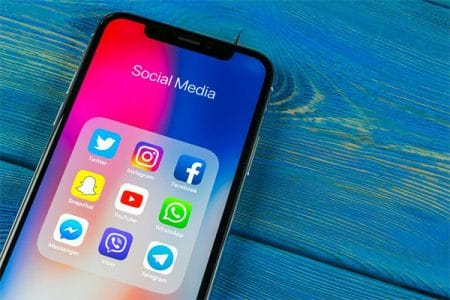 Whether it’s for informative or entertainment purposes, mobile apps have become a very important part of our lives over time. These apps started from the most basic tools we often overlook in our current times, such as clock widgets, calculators, calendars, and contact lists. When we think about mobile apps, we often associate them with social media apps like TikTok, Instagram, Twitter, and the like. This comes as no surprise, by the way, since these apps are some of the world’s trendiest at the moment.
As Africa’s leading mobile app market, Nigeria is no stranger to these applications. Over the past decade, there have been numerous technological breakthroughs and innovations in the continent, which has eventually led to these apps being rather commonplace, especially amongst the new adult demographic.
In this article, we’re looking at five of the most popular android apps in Nigeria and what they have to offer you. So let’s get right into it!

Number 5: Instagram
Are we even surprised? Instagram has been one of the all-time favorite apps for millions across the globe ever since the android version of the platform was released back in 2012. As of 2022, the app has roughly a billion users! If somehow you’re still a stranger to this app, let us give you a brief overview.
Instagram is the brainchild of two partners, Kevin Systrom and Mike Krieger, who studied social media networks for an extensive period before developing their own platform from their findings. They successfully created a photo and video-sharing social networking service used by ordinary consumers, businesses, and celebrities alike. Especially after the acquisition of the platform by Facebook, there has been a massive increase in its efficiency and the quality of service it provides, which has further attracted numerous users.
Nigeria hosts a massive 9.9 million users alone, which approximates 4.6% of its population, say reports from January 2022. The majority of these users are men, accounting for 56.7% of the pool. The demographic aged 25 to 34 makes up the largest portion of these users, with men outnumbering women by 400,000.

Number 4: Facebook Lite
We’ve all heard of the multinational tech conglomerate Facebook, now known as Meta Platforms, but what about Facebook Lite? This app is pretty much the same as the Facebook app we all know and love with just one key difference: its size. Lite is far smaller than the original, helping you save valuable phone storage and allowing you to use the app in 2G conditions as well. It takes up less than 10MB of space, whereas the other app consumes around 167MB. Despite this, Lite allows you access to many of Facebook’s features, such as adding to your Facebook Timeline, liking posts and pictures, searching for new friends to connect with, and joining new groups.
As of January 2022, there are 34.6 million users of Facebook in Nigeria, which is around 15.9% of its whole population. Again, most of these users are men (about 58.6%). The new adult demographic aged 25 to 34 is again the largest user group, around 11.6 million, with the men leading the chase by 1.8 million users.

Number 3: ZOOM Cloud Meetings
“Stay connected wherever you go.”
True to its word, ZOOM Cloud Meetings is an android application that allows users to host and join video and auditory meetings with other users. You also access valuable features, such as screen sharing and cross-platform instant messaging. You can make and receive phone calls, join webinars and virtual sessions, and remote work without the hassle of poor video and audio quality. Especially since the pandemic hit in early 2020 and worldwide lockdowns were imposed, ZOOM Cloud Meetings are often the primary alternative for virtual meetups, study sessions, and business purposes. Around 500,000 users from Nigeria have been found to be avid users of ZOOM.

Number 2: TikTok Lite
If you have access to the internet, you’ll have undoubtedly come across some content from the most trendy app amongst kids and young adults: TikTok. This app allows you to tell stories, share funny moments in your life, make comedic and educational skits, and share your talents in fifteen-second videos. By downloading the app, you can get a personalized video feed based on the type of content you’re interested in, whether comedy, food, DIY, dance, music, or health and lifestyle. There’s virtually no limit to what you can share as long as you don’t cross the app’s official guidelines!
TikTok Lite is a smaller version of TikTok, which takes up less space and faster network connection speed. Sensor Tower has reported as of December 2020 that there have been more than 2.6 billion downloads of this app worldwide, and in January 2021 alone, there were 62 million downloads. TikTok is particularly famous amongst the younger audience and is redirecting the interest of young Nigerian social media users from apps like Instagram to its feed. In 2020, this app managed to gain 31.9% of the market share in Nigeria, a feat to be celebrated!

Number 1: WhatsApp
The most popular android app in Nigeria that you’ve all been waiting for is none other than our favorite entirely free messaging and video-calling app: WhatsApp! This application boasts around 2 billion users in more than 180 countries because of its reliability, simplicity, and favorable privacy policies. You can connect with anyone, anywhere across the world, with simply their phone number—no need to know any login credentials. You can also host calls with up to eight people for free and form group chats to stay better connected with your friends, family, and co-workers.
Hence, this android application is one of the best and most convenient ways to connect and stay in touch with others. Similar to all other apps, WhatsApp has also seen a massive increase in its users ever since the start of the COVID-19 pandemic. It is now the most widely used platform in Nigeria and enjoys a strong and loyal customer base of around 90 million users.