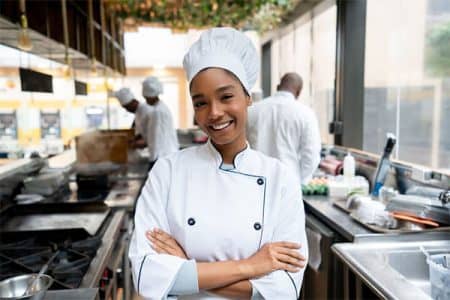 Nigerian food is no doubt, one of the most admired meals around the globe. The chefs in Nigeria are under growing pressure to challenge and satisfy diners. Cooking is no more restricted to creating a dish that looks and tastes good. It has become a ‘medium’ through which the best can let their imaginations spread like wildfire. In this article, you will come across Top five Nigerian Chefs.

Tunde Wey: He is a young and patriotic chef who charms Nigerian culture and food. Tunde Wey is a self- taught chef; he has never been into lavish cooking schools. He intended to be a lawyer before stepping into the world of cooking. Tunde made it to America at the age of 16, initially he worked as a dance trainer and later on served food at Wendy’s. Afterwards he moved to Detroit with his old roommate Peter Dalinowski, they started an innovative restaurant concept and named it as ‘the Revolver’. Tunde Wey went on tour in 2014 around these American cities, Washington, Buffalo, Chicago, Philadelphia, and New York City to do the honors of Nigerian themed diners at top restaurants as a guest chef. He got recognized by ‘New York Times’, and they ended up producing a documentary about Wey’s passion for cooking. Tunde Wey is not only a chef but also a supporter of racial inequity. He requests diners to come on board with inequality in the US.

Fregene Gbubemi: He was born in Benin city and graduated with a bachelor’s degree in ‘Industrial Relations and Human Management’. People refer to him as Chef Fregs, he is indeed the best Nigerian chef and undoubtedly master of French and Nigerian cuisine. Fregs is passionate about artistic display of desserts. He initially worked as a Suya seller and gradually established himself in the culinary industry of Nigeria. He worked very hard in his journey and became a successful chef at the end. Some of his sayings are as follows. “I’ll start off by saying that growth is painful but worth it. Growing the business has been such a journey.” and “Never do more than what you can with your given resources. Do not get greedy and want to make money quickly. It’s Quality over quantity. Pay the business first then yourself.

Alex Oke Alex is a Nigerian/Russian Chef, he is passionate about pastry, bread, and confections. Chef Alex is expert in both contemporary and classical French cuisine. He mastered his culinary arts from ‘Pacific Institute of Culinary Arts’. Chef Alex currently resides in Lagos and owns ‘XO Boutique Bakery’. Additionally, he is a trainer at the Culinary Academy. He practices a combo of art and sensual wisdom while experimenting with Nigerian dishes, Alex fuses them with Asian and European form to create “gentrified Nigerian food”.

Tomi Makanjuola: Tomi was born in Nigeria and currently resides in London. She is a famous writer, chef, and food blogger who created and now maintains The Vegan Nigerian (a slot for people seeking culinary trials to have a know-how about Nigerian food with a vegan twist). Tomi shares a variety of vegan menus developed using famous Nigerian ingredients in advance and innovative approaches. Her recipes portray her passion for fusion and vegan cuisine. Tomi, being a writer, also published a book which is titled ‘Nice Cream’ and some of her recipes are featured on various online platforms including One Green Planet and BBC.

Ozoz Sokoh: Most people know Ozoz as the Kitchen Butterfly, she thinks of herself as a Traveler by lens and plate. She is a famous writer and food explorer who is most enthusiastic about food fusion. Ozoz is skilled in altering Nigerian meals into delicious culinary adventures, she aims to elevate traditional Nigerian food to fine dining. Ozoz came up with The New Nigerian Kitchen (a platform which honors Nigerian cuisine by reviving and describing Nigerian food). She is of the view that reinventing old recipes will assure the continuation of old tradition to be passed down from one generation to the next generation.